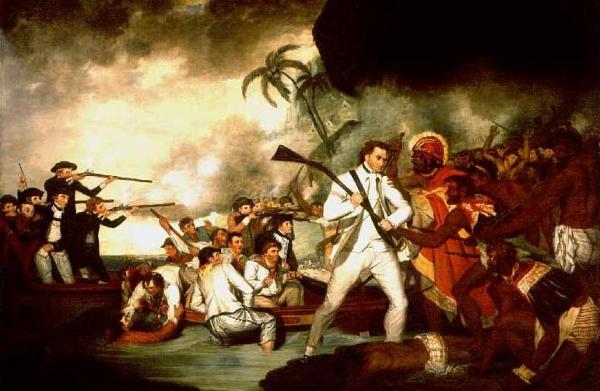 Captain Cook with sailors and his Marine Guard at Kealakekua Bay

Early history of the Royal Marines

For many centuries sea power has enabled Great Britain to protect her interests all over the world. An essential part of that sea power has been the ability to extend this influence ashore by the landing of military forces.

Since the formation in 1664 of the Duke of York and Albany's Maritime Regiment of Foot, otherwise known as the Admiral's Regiment, this amphibious requirement has been carried out by the Royal Marines, whose motto "Per Mare Per Terram" explains their role "By Sea By Land".

Originally recruited largely from the Trained Bands of London, the Corps today is proud to inherit the privilege of marching through the City of London with Colours flying, drums beating and bayonets fixed, an honour enjoyed by very few other regiments. This descent is traced through successive regiment of Marines, raised at the outbreak of a war and disbanded each time peace returned, until 1755, when the Corps was permanently established under the control of the Board of Admiralty. Since then it has continued to provide a military force as an integral part of the Royal Navy.

The name of the Marines became well-known throughout the world. In the early days, besides providing the small-arms men for duty on the upper decks of His Majesty's ships in actions the task of the Marine Corps was to enable the Navy to carry out raids ashore whilst operating at a distance from its bases.

(All of the Plymouth Division except number 1, All joined 9 July 1776 except Phillips and Portsmouth)

John Ledyard was a Corporal of Marines on the last voyage and later became a traveller and writer.

Captain Molesworth Phillips, who accompanied Captain Cook on his last voyage and was wounded when Captain Cook was Killed died on 11 September 1832. His obituary from "United Services Journal", 1832, Part III, reads:- "At Lambeth, Lieut.-Col. Molesworth Phillips, n.p. Royal Marines, the last surviving companion of the illustrious circumnavigator, Cook, of whose death he was an eye-witness, and, to a certain extent, the avenger."

The following extract is taken from "Britain's sea soldiers" by Colonel C. Field, published by the Lyceum Press, Liverpool, 1924, which in turn is based upon the book "Memoirs of the life and travels of John Ledyard" by Jared Sparks, published in London 1828.

"Although the killing of Captain Cook by the natives of Hawaii In the Sandwich Islands cannot well come under the category of either a Naval or Military engagement there was a certain amount of fighting immediately subsequent to his death, and the heroism of Lieutenant Phillips of the Marines, who instantly avenged its was most conspicuous. Sergeant Ledyard, of the same Corps, who was also present, and who afterwards became rather a noted traveller, gives a very interesting account of the unfortunate affair. This is taken from Jared Spark's Memoirs of Ledyard's Life and Travels, published in 1828. The Immediate cause of the fracas in which Cook met his death was the abstraction of the Discovery's largest cutter by the natives. Upon the loss of the boat being reported, Cook, in his pinnace with six Marines, and supported by other manned and armed boats, landed at the village of Kowroa for the purpose of capturing the chief Teraiobu, in order to hold him as a hostage for the return of the stolen boat. Mr. Phillips, the Lieutenant of Marines, induced him to come out of his hut. He accompanied them, and Cook was trying to persuade him to come on board his boat to Kowroa, when the crowd of natives who had assembled interposed with a hostile demonstration. 'There was one in particular,' writes Ledyard, 'that advanced towards Cook in an attitude that alarmed one of the guards who presented his bayonet and opposed him, acquainting Cook in the meantime of the danger of his situation, and that the Indians in a few minutes would attack him; that he had overheard the man whom he had just stopped from rushing in upon him, say that our boats which were out in the harbour had just killed his brother, and that he would be revenged. Cook attended to what this man said, and desired him to shew him the Indian that had dared to attempt a combat with him, and as soon as he was pointed out, Cook fired at him with a blank. The Indian perceiving he received no damage from the fire, rushed from without the crowd a second time, and threatened anyone that should oppose him. Cook, perceiving this, fired a ball which, entering the Indian's groin, he fell, and was drawn off by the rest. Cook, perceiving the people determined to oppose his designs, and that he should not succeed without further bloodshed, ordered the Lieutenant of Marines, Mr. Phillips, to withdraw his men and get them into the boats, which were then lying ready to receive them. This was effected by the serjeant, but the instant they began to retreat, Cook was hit with a stone, and perceiving the man who threw it, shot him dead. The officer in the boats observing the guard retreat, and hearing this third discharge, ordered the beats to fire. This occasioned the guard to face about and fire, and then the attack became general. Cook and Mr. Phillips were together a few paces in the rear of the guard, and perceiving a general fire without orders, quitted Teraibou, and ran to the shore to put a stop to it; but not before being able to make themselves heard, and being close pressed upon by the chiefs, they joined the guard, who fired as they retreated. Cook, having at last reached the margin of the water, between the fire of the boats, waved with his hat for them to cease firing and come in, and while he was doing this, a chief from behind stabbed him with one of our iron daggers, just under the shoulder-blade, and it passed quite through his body. Cook fell with his face in the water, and immediately expired."

Grateful acknowledgement is made to the Royal Marines Museum, Southsea, Hampshire, for the help and information received in connection with this article and the use of J.C. Beaglehole's "Journals of Captain James Cook", volumes I, II, III for the list of Marines from the ship's company.